Hypospadias is an abnormality that refers to the urethral opening at the ventral penis, and is due to dysplasia of the ventral tissue of the urethra and penis. The foreskin is abnormally turned towards the dorsal side of the penis and accumulates in a cap-like manner. Hypospadias is one of the major genitourinary congenital malformations observed in male children, with reportedly increasing prevalence (1-3). Megameatus intact prepuce (MIP) is a unique variant of hypospadias and is a clinically rare condition, with an incidence of approximately 1/10,000 that accounts for 1% to 3% of hypospadias cases (4). With the increasing prevalence of medical physical examinations, the detection rate of MIP is also rising.

MIP differs from the typical hypospadias. Its anatomical features are as follows: intact foreskin, wide and fish mouth-like urethral opening, deep navicular fossa, wide and shovel-like glans, and no ventral downward curvature or slight dorsal bending of the penis body (5). According to the position of the urethral opening, MIP can be divided into glans, coronal, and distal penis types (5). Due to the anatomical particularity of MIP, it is necessary for clinicians to design a suitable surgical method that takes into account the development of the glans, the width of the urethral plate, the depth of the urethral groove, and the shape and position of the urethral opening to achieve satisfactory therapeutic effects (4-6). No single urethroplasty method provides a universal solution for all patients.

Institutional review board approval for this study was obtained from the Ethics Committee and Institutional Review Board of the authors’ institution (No. 2018-39). A retrospective analysis was performed for patients with MIP from January 2010 to January 2018. Detailed information for each case is shown in Table 1. Patient age ranged from 2 to 13 years, with an average age of 8 years. MIP was diagnosed after hospital admittance; 2 cases of MIP were discovered upon physical examination and were due to abnormal position of the urethra, and 25 cases were discovered with phimosis during the examination preceding posthetomy or exposure of the balanus during preputial orifice stenosis. The urethral opening was located in the coronal area in 15 cases, the distal penis in 10 cases, and the glans in 2 cases. The width of the urethral plate was 0.8–1.2 cm, with an average of 1.06±1.39 cm. 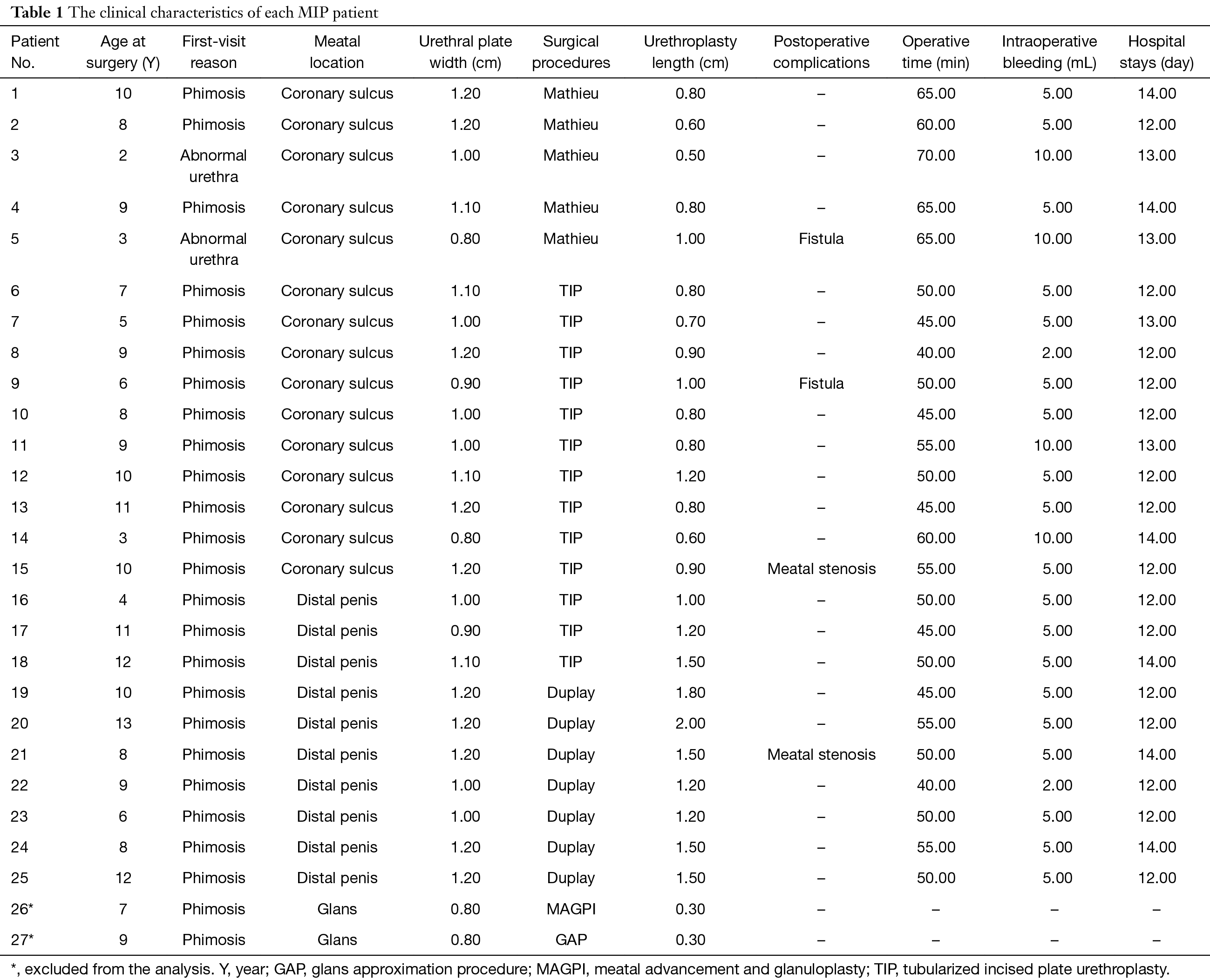 Table 1 The clinical characteristics of each MIP patient
Full table

The operative methods included meatal advancement and glanuloplasty (MAGPI, 1 case), the glans approximation procedure (GAP, 1 case), Mathieu (5 cases), tubularized incised plate urethroplasty (TIP, 13 cases), and Duplay (7 cases). Based on the operative methods, the patients were divided into the Mathieu group, TIP group, and Duplay group; because there was only one MAGPI and one GAP patient, they were excluded from the analysis. There was no significant difference in age among the three groups. All patients were treated with antibiotics to prevent infection after surgery, and urethral catheters were in place for 12–14 days.

The patients were followed up for 6 to 36 months. The operative time, intraoperative bleeding, postoperative analgesia rate, and complications including urethral fistula and meatal stenosis were observed in the three groups, and an analysis was conducted to determine how age at surgery, urethral plate width, urethroplasty length, meatal location, and surgical procedure influence complications.

Statistical analysis was performed using the Statistical Package for the Social Sciences (SPSS), version 20.0 (SPSS Inc., IBM Corp., Armonk, NY, USA). The countable data are presented as number (n) and percentage (%), and were analyzed by the Chi-square and Fischer’s exact tests. Measurements are presented as the mean ± standard deviation (SD), and were analyzed by analysis of variance (ANOVA). Estimated complication-free survival curves were obtained using the Kaplan-Meier method. A P<0.05 was considered to indicate statistical significance.

Urinary fistula occurred as early as 2 weeks after surgery, and meatal stenosis occurred at 48 weeks after surgery. Figure 1 shows the Kaplan-Meier estimated overall complication-free survival. The primary estimated complication-free survival at 2, 3, 8, and 48 weeks was 96.0%, 92.0%, 87.8%, and 80.5%, respectively. Primary estimates of Mathieu, TIP, and Duplay complications were 80.0%, 84.6%, and 85.7%, respectively. The type of surgical procedure had no significant effect on the prevalence of complications (Figure 2). On univariable analysis, the age at the time of surgery, urethral plate width, urethroplasty length, type of surgical procedure, or meatal location (coronary sulcus or distal penis) did not predict the development of complications (Table 4). 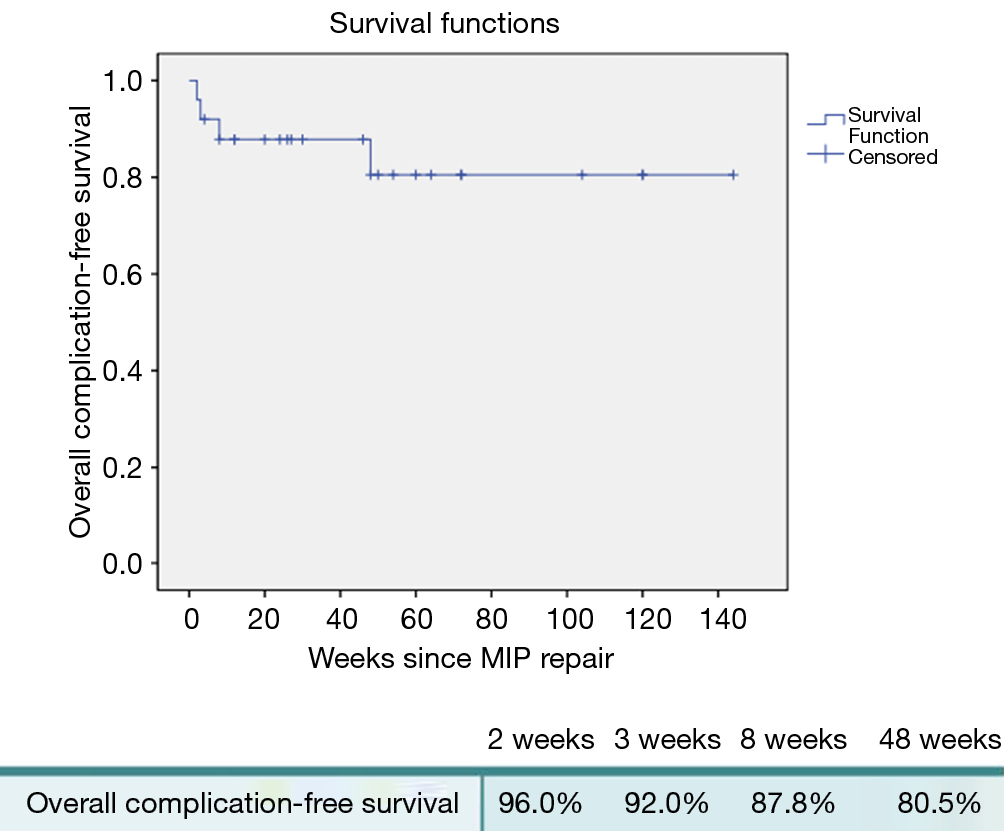 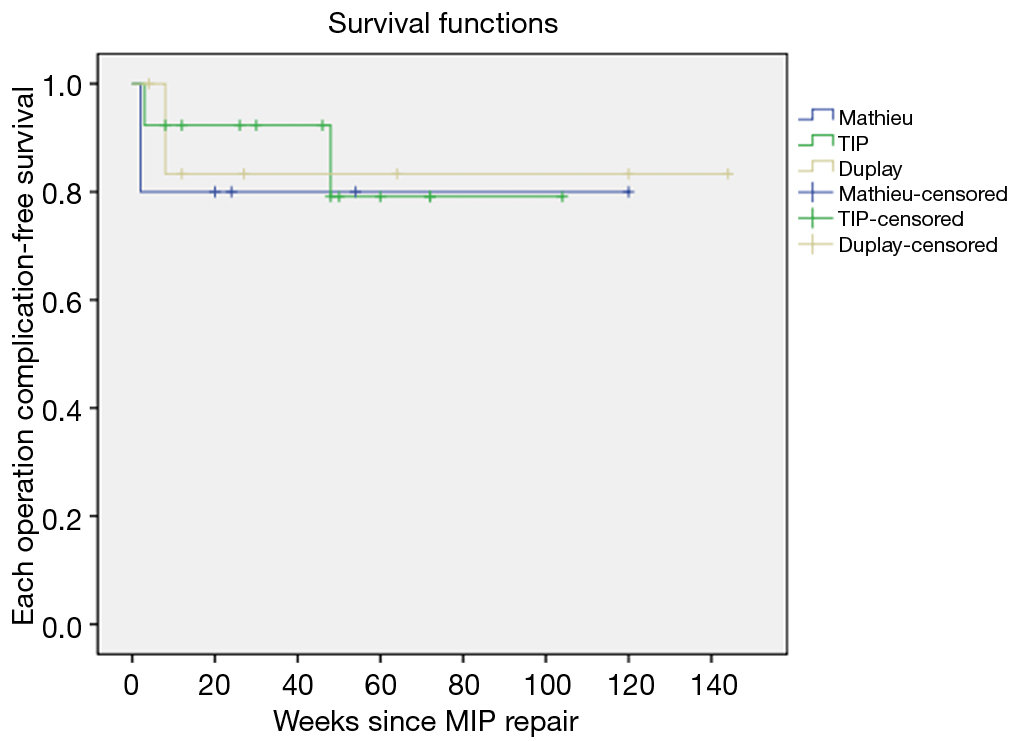 No reports were found documenting MIP accompanied by obvious penile curvature, and most patients are often misdiagnosed at an early age as having phimosis because the foreskin is intact. In Europe or the USA, some cases of MIP are found during circumcision of neonates or in infancy (9). The MIP lesion is hidden and difficult to find. In our study, most cases (25/27, 92.6%) were accidentally discovered during hospital visits for phimosis, with family members being unaware of any urinary tract abnormalities. The actual incidence of MIP might be higher than the current estimates, as a significant number of children with MIP go undetected or are not treated after diagnosis.

There are cases where MIP is not associated with any functional issues. It remains controversial whether patients with partial MIP, but with normal micturition, unobstructed sexual life, and unaffected daily life, must undergo surgical intervention (10). However, surgical correction of MIP in the era of increased cosmetic awareness and concern is justified.

The MIP hypospadias variant is considered a surgical challenge. The suitable procedure for each patient should be tailored according to the anatomic features, and no single technique is appropriate for all variants of MIP hypospadias. Based on the anatomic features, several techniques can be used with good functional and cosmetic results (5,6,8,10), but no data comparing the several common surgical techniques are available. We present our experience with the MIP variants and the common surgical techniques used for treatment, which include the MAGPI, GAP, Mathieu, TIP, and Duplay urethroplasty techniques.

For the glanular type of MIP, the MAGPI or GAP procedure can achieve good surgical results in restoring the morphology and function (5,6). These procedures can overcome the challenges of a wide, deep glanular groove and a noncompliant fish mouth. In our series, two patients with glanular MIP underwent MAGPI or GAP surgery. As there was only one case each, these two surgical methods were not included in the following analysis. The remaining 25 cases of coronal or distal MIP underwent Mathieu, TIP, or Duplay surgical procedures.

In the Mathieu technique, the proximal urethral flap is reversed to match the urethral orifice, which retains the distal urethral plate, without distal and proximal urethral anastomosis. This procedure reduces the occurrence of urethral stricture, and the operation is simple and safe (10). Compared to the other two procedures, we found that there was a significantly longer operative time for the Mathieu technique. One of the 5 patients who underwent the Mathieu procedure developed a urinary fistula while removing the urethral catheter at 2 weeks after surgery. The postoperative complication occurred early, which may be related to the reversed proximal urethral flap tissues being too thin, leading to poor blood supply.

The TIP technique is performed by longitudinal incision of the urethral plate to broaden the urethra. The occurrence of urethral stricture or urinary fistula is significantly reduced because the urethral plate is composed of muscle fiber tissue and vascular innervations with no annular anastomosis (5,6). For the 13 patients in the current study who underwent TIP, the fascia flap, with its rich blood supply, was applied to cover the formed urethra, further reducing the incidence of postoperative urinary fistula. Nevertheless, there was still 1 case of urinary fistula after the operation, with the incidence rate being 7.7% (1/13), which was consistent with the 4–28% rate reported in previous studies (11-13). The key to the TIP technique is that the midline incision of the urethral plate should be over the corpus cavernosum surface to prevent bleeding, and the urethral plate should be fully expanded to ensure that the urethral suture is tension-free. The use of the subcutaneous fascia to cover the urethra significantly reduces the incidence of urinary fistulae (13,14). In addition, TIP is also suitable for cases in which the initial surgery fails and reoperation is needed (15).

There are different advantages for each of the three surgical methods. The present results showed that there were no significant differences in intraoperative bleeding, hospital stays, postoperative analgesia rate, and cure rate when comparing the three methods. However, the operative time of the Mathieu procedure was significantly longer than that of the TIP and Duplay procedures, which may be related to the design of the operation and the proficiency of the surgeon. In addition, the complication-free survival analysis indicated that there were no significant differences between the three urethroplasty procedures.

The success of hypospadias surgery is affected by many factors (17). Our current results found that the 1-year complication rate was 19.5% during the 3-year follow-up period, which was close to the statistics from a previous report in a large case showing a 24% complications incidence of distal hypospadias (18). We analyzed the age at surgery, urethral plate width, urethroplasty length, type of surgical procedure, or meatal location (coronal or distal penis), and found that they did not independently predict complications.

The results of the present study showed that the clinical manifestations of MIP are concealed and often accidentally discovered during physician visits for phimosis. Thus, the actual incidence of MIP might be higher than that currently estimated. It is advisable to preserve the urethral plate during correction, especially for coronal or distal MIP. Excluding operative time, the intraoperative and postoperative recovery and cure rates were similar between the Mathieu, TIP, and Duplay urethroplasty techniques. In addition, the age at surgery, urethral plate width, urethroplasty length, type of surgical procedure, or meatal location (coronal or distal penis) did not independently predict the development of complications.

Ethical Statement: The authors are accountable for all aspects of the work in ensuring that questions related to the accuracy or integrity of any part of the work are appropriately investigated and resolved. Institutional review board approval for this study was obtained from the Ethics Committee and Institutional Review Board of the authors’ institution (No. 2018-39).