Erectile dysfunction (ED) affects 20% of US adult males (1,2) with total annual treatment costs projected to exceed 10 billion (1,3). The American Urologic Association currently includes oral phosphodiesterase-5 inhibitors (PDE5-I) including sildenafil, tadalafil, and vardenafil as a first line intervention in addition to lifestyle modification (4,5), however, up to 40% of patients fail to respond to oral PDE5-I (6). Alternative interventions with established efficacy include different PDE5-Is, intracorporal injections (ICI) with agents such alprostadil or trimix [alprostadil, phentolamine, and papaverine (7)] and inflatable penile prosthesis placement (IPP) (8,9). There are a lack of validated algorithms existing for second line interventions. In the increasingly tenuous financial climate of healthcare, cost effectiveness analyses (CEA) remain important tools used to evaluate the cost and efficacy of medical interventions. Such analyses compare costs of a treatment relative to alternative interventions with respect to how many quality adjusted life years (QALYs) can be gained (10). Prior studies have evaluated the cost effectiveness of erectile dysfunction (ED) treatment comparing sildenafil, the only PDE5-I with a generic option, to alternate ED interventions including ICI and penile prosthesis (11-13).

There is a lack of data, however, comparing the cost effectiveness of second line ED interventions after first line oral PDE5-I have failed. In this study, we sought to evaluate the cost-effectiveness of alternate management options to restore erectile function.

A systematic literature review was performed using MEDLINE to determine probabilities of interventions, rates of complications, and health state utilities. The initial and transition probabilities, costs, and health utilities are summarized in Tables 1-3. A health utility score is a measure of the proportion of a perfect QALY that can be gained from a health state or intervention. They are usually determined based on health-related quality of life (HRQL) survey data. Health utilities are scaled from 0 to 1 where a score of 1 would equate a perfect QALY gained by a health state and a score of 0 would equate to death (10). When such data were not available, figures were based on surrogate estimates of similar health care states or expert clinical judgement. Cost was determined using publicly published manufacturer data. 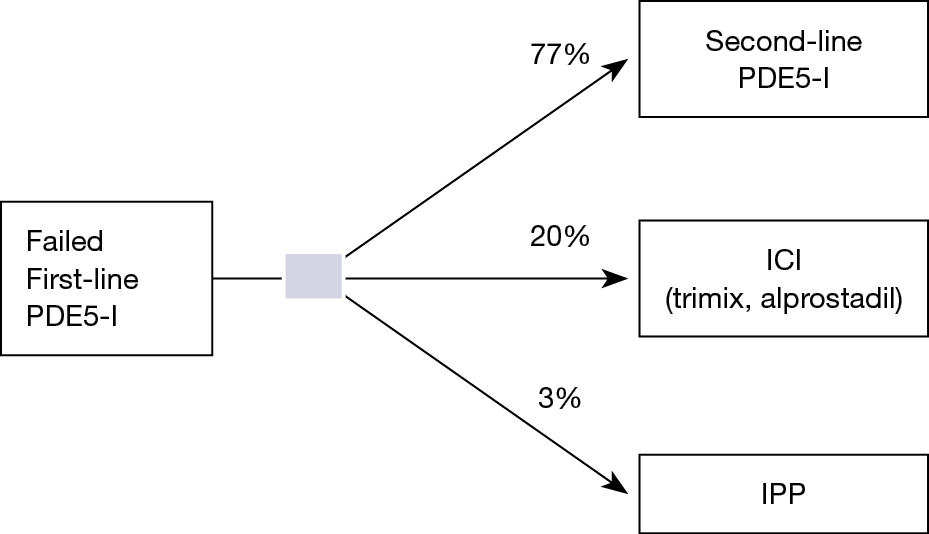 The health care provider’s perspective was used for the cost-effectiveness analysis because the costs obtained from literature were reimbursed amounts of the procedures only. Indirect costs including health care access (travel/lodging) and morbidity/mortality were not included. The time period of the model was constructed to cycle annually for a period of 10 years which is the average lifespan of an IPP (24). ED increases with age, and therefore the majority of men suffering from ED are 60 years of age or older (25) therefore, the model was based on male patients, age 60 years with a prior failed trial of sildenafil. Each arm of the model was constructed to evaluate erectile intervention outcomes while incorporating the health utilities and costs associated with the probability of failure, subsequent interventions, and complications including ICI related priapism and IPP explant for infection or erosion. Because we considered a period of 10 years in the Markov model, we discounted the outcomes and costs corrected for inflation by 3% per year to take into account the impact of time on the costs and outcomes (26,27).

The cost of a new patient work-up (including average cost of penile Doppler and diagnostic intracorporal injections) was estimated to be $600.00 based on average costs at our institution. After failed first line PDE5-I, patients could elect treatment alternatives including, second line PDE5-I (Figure 2), ICI (alprostadil or trimix) (Figure 3), or IPP (Figure 4). Bimixes, quadmixes, and different costs of various trimixes were not included due to wide heterogeneity of costs and variable efficacy. 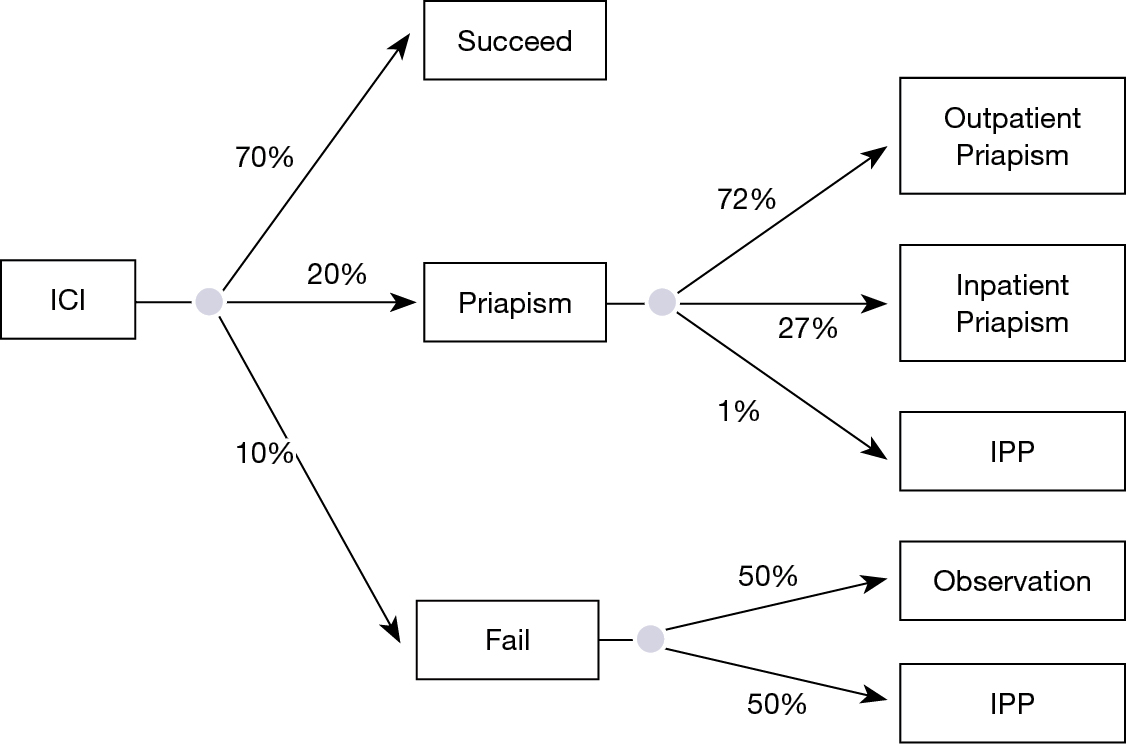 A literature review revealed no studies evaluating current rates of second line PDE5-I use, therefore, the probability of men choosing to trial a second line PDE5-I was assumed to be 0.77 based on expert opinion and based on previously determined rates of ICI utilization (~20%) and penile prosthesis utilization (~2–3%) (9). The health utility of a successful second line oral PDE5-I for a 60-year-old male was estimated at 0.70 (11,12). The cost of second line PDE5-I was determined by averaging the annual cost of tadalafil (14) and vardenafil (15) based on then previously cited average use of eight times per month (11,12). The cost of #30 tablets, 10 or 20 mg tabs of vardenafil =$1854.00 or ~$62.00 per pill. This equates to roughly $5,952.00 annually. The cost of #30 tablets of 10 or 20 mg Tadalafil tablets =$2,404.80 or ~$80 per tab which equates to $7,695.60 annually. The average annual cost of the two second line PDE5-I is therefore roughly $6,823.8 annually. It was conservatively assumed that of the patients who failed fist line PDE5-I, only 60% were successful with a second line PDE5-I based on expert opinion. Of those who failed, the model assumed that a third line PDE-5I was not trialed and that patients went on to observation (20%) versus ICI (60%) or IPP placement (20%) (Figure 2).

ICI is a recommended second line ED intervention (4) with studies demonstrating an average of 70% (16,17) efficacy. We assumed that 20% of patients failing first line PDE5-I would elect to use ICI, 10% alprostadil and 10% trimix (papaverine, phentolamine, alprostadil). While it has been deemed the most effective non-surgical treatment for ED, there is a higher drop-out rate of up to 40% (17). Prior studies have demonstrated a risk of priapism ranging from 5% to 35% of patients (17,18) using ICI so the model incorporated an average priapism risk of 20%. The utility of priapism development as assumed to be 0.56 as there was no utility identified in the literature. The inpatient versus outpatient management probabilities and cost of priapism complications was determined based on a recent study by Stein et al. using nationwide emergency department sample (NEDS) (21). This demonstrated that of all priapism ED visits, 72% were discharged to home and 27% were admitted as inpatients. The mean hospital charge was $1,778 per encounter if patients were discharged to home and $41,909 per encounter if admitted. We assumed that if patients underwent inpatient management of priapism that they did not resume ICI and went on to observe or underwent IPP placement (Figure 3).

The three-piece inflatable penile prosthesis IPP remains the gold standard surgical ED management in the US following failed or intolerability to oral PDE5-I or intracorporal vasoactive injections. As such, for this analysis we did not include the inflatable two piece or semi rigid prosthesis. Studies demonstrate roughly 80% patient and partner satisfaction (22) with the three-piece IPP. We estimated that roughly 3% of patients would elect to undergo immediate IPP following failed first line oral PDE5-I (9). The device has an average life span of 10 years, thus the model was set to look at cost effectiveness over this period (24). Prior studies have assigned a health utility 0.78 (8) to IPP placement. The average cost of device placement was determined from Boston Scientific© publicly available cost information. The base cost of IPP placement used in the model included only perioperative cost and was averaged between outpatient and acute care surgery cost to be $13,437 (Boston Scientific©). The probability of all cause IPP failure or reoperation was found to be 15% at 10 years (18). It was assumed that if an IPP failed for any reason including mechanical failure, infection, or other complication, the patients had a 50:50 chance of either undergoing revision or observation. Health utilities for IPP failure were based on surrogate values for ED, 0.56 (12).

Of note, the intra urethral alprostadil suppository (MUSE) was not included in this decision analysis given prior findings of inferiority to ICI in previously published randomized controlled trials (28). Further, vacuum erection devices were not included in this particular model due to variable cost and satisfaction.

For this analysis the incremental cost effectiveness or ratio of cost per effect of treatment or willingness to pay threshold was set at $20,000 based on prior studies of similar subject matter (11). A one way sensitivity analysis was conducted to determine potential impact of cost variation with a range of ±3% because there are no available ranges of costs we could use for a sensitivity analysis. Also, we considered a range of 0% to 5% in the discount rate for sensitivity analyses. TreeAge pro software (TreeAge Pro© 2017, R2.1) (29) was utilized to create and run the model.

Based on the $20,000 willingness to pay for each increase in QALY, our model demonstrated that over a 10-year period, relative to alternate interventions, although incurring more upfront cost, placement of an IPP was the most cost-effective intervention following failed first line PDE5-I. While ICI (alprostadil) and ICI (trimix) were associated with the highest overall preserved QALY of 8.51 and 8.47, this was compounded by prohibitive costs of $7,392 and $5,738 per QALY, and an incremental cost ration of $60,065 and $41,394 respectively, which are far beyond our willingness to pay threshold. The least cost-effective modality was that of second line PDE5-I (Table 4, Figure 5). Our one-way sensitivity analysis demonstrated no significant change with a factored variation range of ±3%. 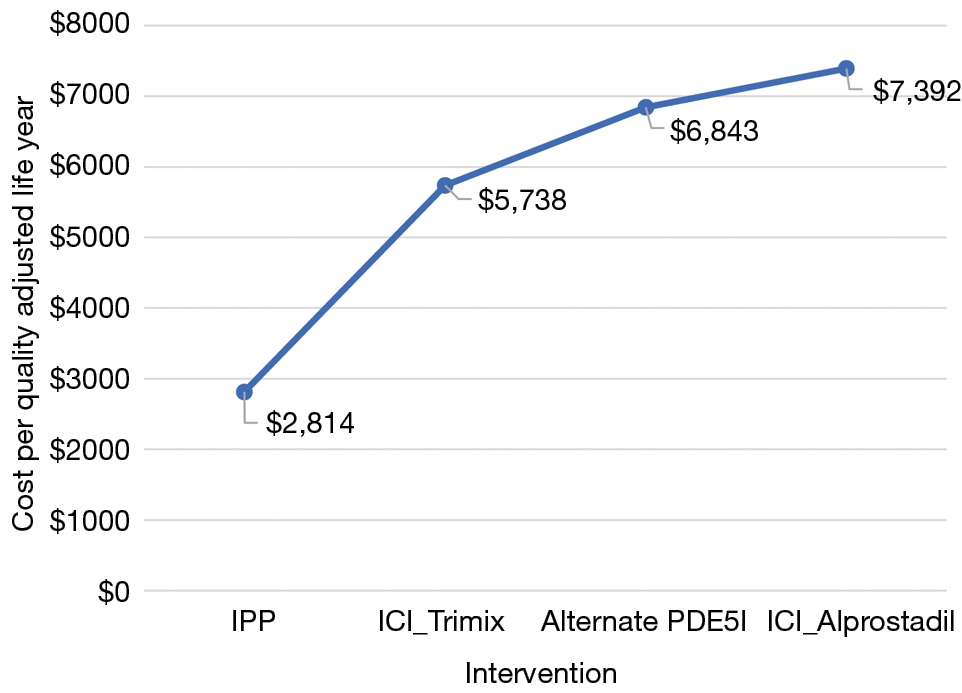 These results suggest that IPP is more cost effective over a 10-year period as compared to alternate PDE5-I and ICI after failed first line PDE5-I.

Prior studies have evaluated cost effectiveness in ED intervention strategies. Mittmann et al. (11) performed a cost utility analysis of oral and non-oral interventions for ED in a population of patients with spinal cord injuries. In this study, they included first line PDE5-I, transurethral suppositories, ICI (alprostadil and trimix), and IPP placement. They found that sildenafil was most cost effective. In contrast to our study however, they were evaluating sildenafil, the least expensive available PDE5-I and alternate ED interventions over a shorter period of time. Despite favorable results, PDE5-Is have up to a 30–45% failure for reasons including lack of efficacy, side effects, and treatment costs. No studies to our knowledge have evaluated cost effectiveness with alternate interventions (6). Sildenafil, the only PDE5-I with a generic formulation, is significantly less expensive than vardenafil or tadalafil which may contribute to the high cost over a 10-year period. Although there are no head to head trials comparing efficacy of PDE5-I (30), studies have demonstrated lower rates of response with second line PDE5-I (6). With costlier name brand medications and lower response rates, it follows that second line PDE5-I would not be cost effective over a 10-year period.

While ICI demonstrated notably increased QALYs, once again, cost prevented it from surpassing IPP in the model. Similar cost effectiveness studies have demonstrated a high cost burden for ICI (31). This likely owes to the continuing cost of injections throughout use coupled with the probability of complications carrying significant cost burdens, as opposed to the IPP with higher up-front costs however lower rate of complications.

This cost analysis was limited by the flaws inherent in a theoretical cost effectiveness model. Most importantly, the majority of probability, cost, and utility estimates were obtained from the literature. Unfortunately, this topic lacks many validated health utility measures, therefore, missing data was substituted with surrogate expert opinion. This should be kept in mind when referencing this study, as cost effectiveness is based on population outcomes that may not directly apply to the individual (10). Further, not all second line ED treatment modalities were included in this analysis. Additionally, this model was based on several assumptions that may not always apply in complex real-world scenarios. However, we demonstrated that when an IPP remains in place for 10 years without complication, it may be the most cost effective intervention following failed PDE5-I. Further study is needed to validate intervention probabilities, success rates, and health utilities.

Using published utility, cost, and complication data in a decision analysis, we demonstrated that IPP placement is the most cost-effective ED intervention following failed first line PDE5-I over a 10-year period as compared to alternate treatment options. Such cost-effectiveness outcomes may be used in ED management counseling.