A 43-year-old patient has just left the office. Her primary care physician had dutifully evaluated her recent complaint of vague abdominal pain with an abdominal ultrasound. The multiple, small, punctate hyperechoic lesions in the kidney were deemed concerning for renal calculi and an abdominal computed tomography (CT) scan was ordered to better delineate these "renal stones". The CT report revealed "multiple bilateral punctate calcifications consistent with possible nephrolithiasis versus nephrocalcinosis," and the patient was referred to urology clinic for further evaluation. In our clinic the patient was interviewed and examined and the scan was carefully reviewed. The patient denied symptoms of renal colic and physical examination demonstrated no costovertebral angle tenderness. No hydronephrosis or evidence of urinary obstruction could be seen on the scan, and we provided a diagnosis of Randall plaques and nephrocalcinosis. The patient was reassured that there were no stones to treat and there was no need for surgery. General lifestyle and dietary modification counseling for stone prevention were provided, and the patient was discharged from our clinic, happy with her benign diagnosis.

But is such a diagnosis benign?

Recent data suggests that a single CT scan may significantly increase a woman's lifetime risk of developing breast cancer. The repeated scanning that is often the mainstay of observation or conservative management of renal stones can result in a cumulative dose of radiation equivalent to that of survivors of Hiroshima's atom bomb. Furthermore, up to 2% of cancers in the United States today might be attributable to radiation related to CT scanning (1). We would argue that having a Randall plaque diagnosed as a renal stone is not so benign a designation and propose that it is time to redefine the delineation between the two. The core question can be simply put-what is the true difference between a Randall plaque and a renal stone, and how can we differentiate the two before patients are subjected to unnecessary diagnostic tests?

To frame the argument, consider the work of Alexander Randall and the ways in which data from his landmark findings could be exploited. In his original autopsy studies Randall noted that 17% of the nearly 500 kidneys had sub-epithelial plaques at the tip of the renal papilla (2). This knowledge can be used as a means to achieve a variety of ends, and these odds may seem quite attractive to patients seeking secondary gain from the diagnosis of a "renal stone". For example, a military reservist aiming to avoid deployment may seek out a CT scan and the subsequent diagnosis of a "renal stone", which would effectively render him non-deployable. Conversely, an airline pilot playing these same odds may go out of their way to get a kidney-ureter-bladder radiograph (KUB) rather than a CT scan, knowing that the low sensitivity for visualizing small calcifications of a KUB will help avoid being grounded with a diagnosis of a "renal stone".

As many as one-fifth of patients undergoing abdominal imaging have renal calcifications which may be diagnosed as "renal stones". But as we often see in our clinic, many of these calcifications are Randall plaques and not true renal stones. Over time, a subset of these Randall plaques will erode into the collecting system, become renal stones, and potentially cause pain. Additionally, although conventional wisdom holds that gross obstruction of the collecting system is the etiology of renal colic, it is theoretically possible that a Randall plaque could result in intraparenchymal obstruction of a duct of Bellini and cause pain (typically there are 12-15 ducts of Bellini in each papilla centrally located transporting urine into the collecting system). So while a Randall plaque may be the precursor lesion to a renal stone, they are by no means equivalent. The line that differentiates the two remains an unexplored urologic frontier and the delineation carries broad implications for clinical practice and for patients.

A large part of the problem with defining this difference lies in the fact that Randall plaques and their role in stone formation remain poorly understood even though they have been under the proverbial microscope for over seventy years. In 1937 Alexander Randall first described a cream-colored lesion near the tip of the renal papilla. The lesion stained positive for calcium deposits and in many cases seemed to replace normal tubular structures. He theorized that these plaques eroded from the interstitium into the collecting system, effectively transitioning a plaque to a stone (2).

More recently, our group and others have examined this interface of the interstitium and collecting system using electron microscopy. Prominent ring-like structures, labeled calcified nanoparticles, have been discovered in this area and are thought to be the building blocks from which Randall plaques are formed (3-6). The composition of these small rings and what lies at the center of these particles remains to be defined. Lingeman's group analyzed Randall plaques with Fourier transform infrared spectroscopy and their data support plaques as a calcium phosphate-based phenomenon (7). Williams et al. later used micro-CT to analyze the interface between Randall plaques and growing calcifications at the papilla tip. Their findings demonstrated that calcium oxalate appears present at this junction (8), suggesting that apatite crystals of the plaque itself may aggregate calcium oxalate on top of a plaque and lead to erosion of stones into the collecting system.

These plaques may be more than simply subepithelial or superficial structures, however. High-resolution radiography with state-of-the-art mammography equipment revealed calcified spicules running deep into the papilla of ex vivo kidney specimens (Figure 1). This structural appearance has led our group to hypothesize that the origins of stone formation related to Randall plaques may in part be a vascular phenomenon (9). This hypothesis is based on the fact that the papilla contain only a few collecting ducts but hundreds of vasa recta. These tiny vessels are the continuation of the efferent arterioles as they flow down toward the tip of the papilla en route to return to the renal vein. For every one descending vasa recta there are four ascending ones, resulting in a unique location for potential vascular venous injury. Several aspects unique to renal physiology support this vascular hypothesis as an etiology for Randall plaque formation. First, laminar blood flow transitions to turbulent flow at the tip of the papilla as the vasa make their acute turn back toward the renal vein. In vascular plaque formation inflammation arises in areas of transition to turbulent flow. In the case of arterial plaques these locations include the bifurcation of the aorta and the iliac arteries, as well as the carotid arteries (10). The 180-degree turn creates a transition to turbulent flow in the vasa recta even more extreme than in the great vessels, predisposing the area to inflammatory changes and subsequent plaque formation. Second, there is a ≥10-fold increase in osmolality that occurs between the renal cortex and the tip of the papilla (11). This hyper-osmolar microenvironment supports a milieu of inflammatory cytokines and proteins where inflammation-related changes caused by vascular injury may be readily transformed into plaque aggregation. Lastly, from the renal cortex to the tip of the papilla, there is a decreasing gradient of oxygen carrying capacity, with medullary tissue demonstrating as little as one-half the carrying capacity of cortical tissue (12). In severe cases, as with diabetes mellitus, this can translate to events such as papillary necrosis and sloughed papilla that may obstruct the ureter. These three issues, a transition from laminar to turbulent blood flow, increased tissue osmolality, and relative hypoxia create the ideal setup for vascular calcification response to inflammation, which we theorize leads to Randall plaque formation. 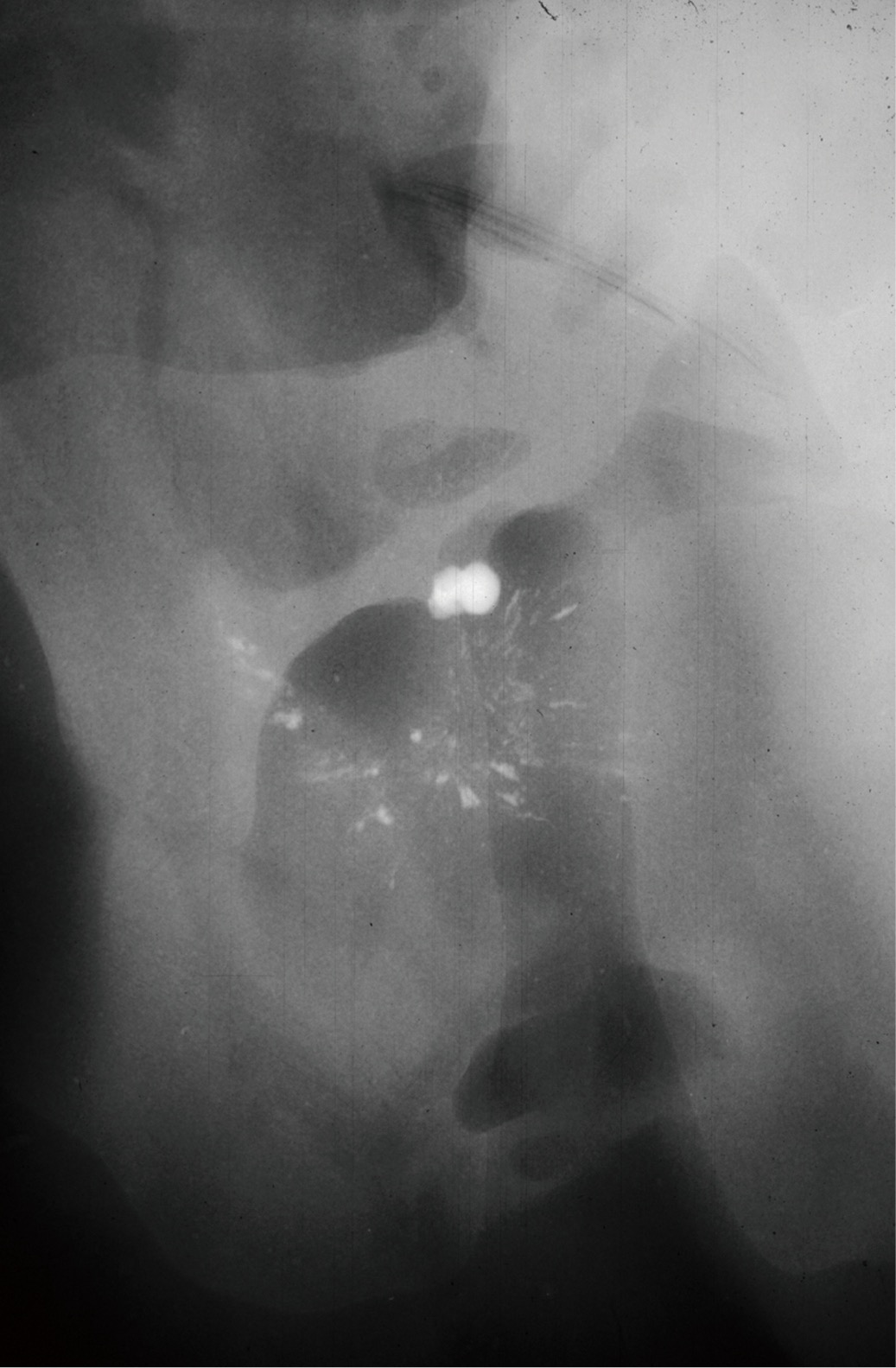 Figure 1 Mammography imaging of the kidney demonstrates a Randall plaque opacity at the center of the radiograph. Spiculated calcified tracks lead into the papillary tissue away from the plaque.

To delineate the difference between Randall plaques and urinary stones, it is also important to understand the location of these plaques. But even the simple question of where these calcifications occur has no straightforward answer. There are the vasa recta and the collecting duct which lie next to each other. We have shown using electron microscopy that calcifications related to Randall plaques are closely connected to the vasa recta (6), while Lingeman et al. have shown they are closer to the collecting duct (13). These two domains are cell thicknesses apart and it is unclear if the initial events in stone formation are an intracellular or extracellular process. It is possible and likely that these events occur in between the two, outside the tubule but not actually in the duct itself. Mapping studies have demonstrated the Randall plaque to reside mostly at the tip of the papilla (14) which has been our experience as well. They can be seen endoscopically as a beige-color colored lesion underneath the urothelium with an unappreciated calcified network extending into the parenchyma, away from the calyx (Figure 2). Only when an inciting event occurs that causes the calcification to fall off does the calcification transition from Randall plaque to urinary stone. Therein lies the clinical challenge-how to differentiate the Randall plaque from the urinary stone before the patient buys themselves more unnecessary diagnostics and a trip to the urologist's office? 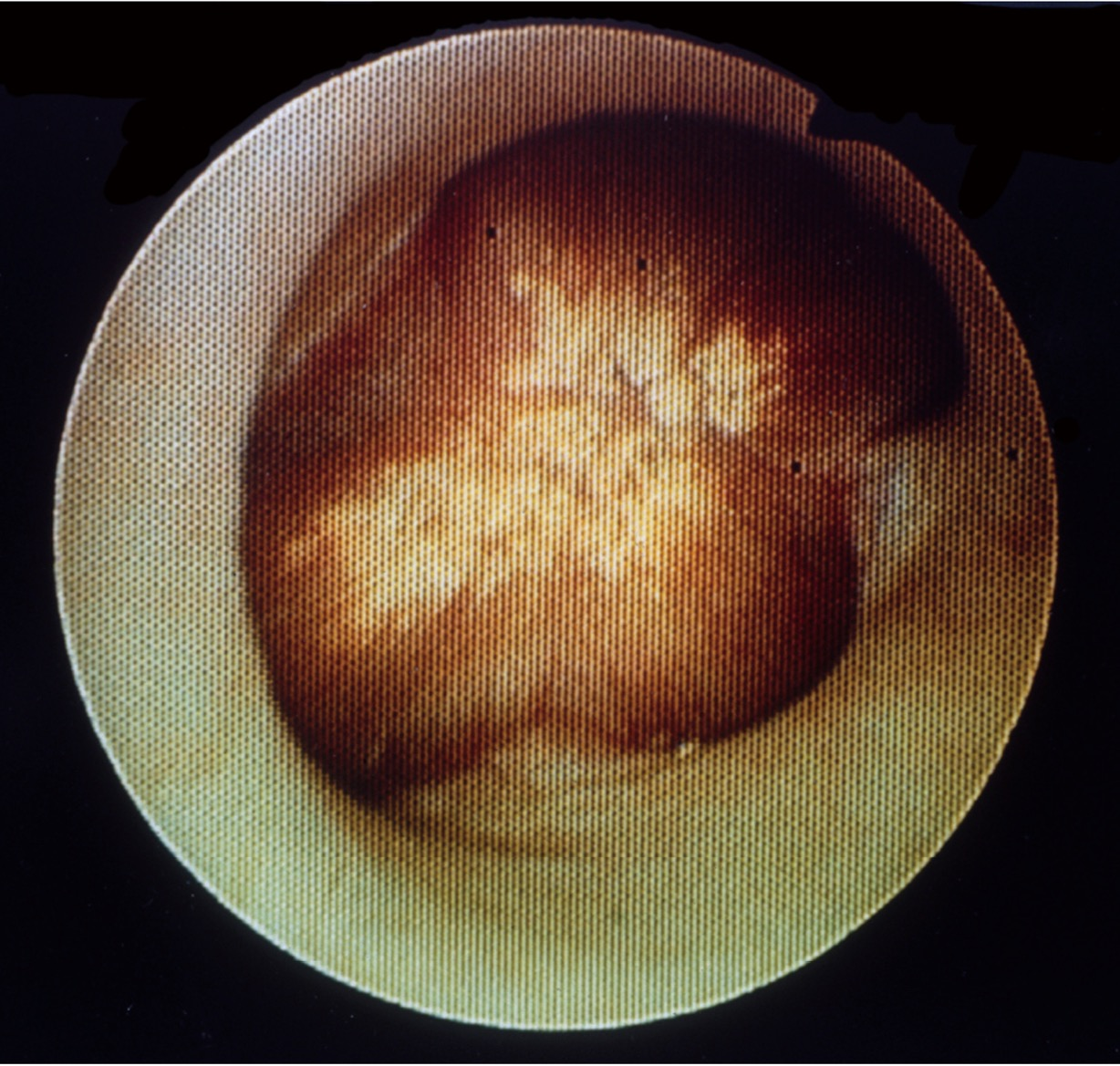 Figure 2 Endoscopic image of a renal papilla with the typical creamy appearance of a Randall plaque in the center portion of the papilla.

We propose that a renal stone is a free-floating calcification suspended within the urine of the collecting system. A Randall plaque on the other hand is an aggregate of a calcium compound intimately associated with and attached to the renal papilla.

Our proposed definition would require that on traditional CT Randall plaques are less than 2 millimeters in their greatest dimension, and at least one-half of the calcification in a Randall plaque is surrounded by renal parenchyma. On renal ultrasonography, small calcifications associated with postacoustic shadowing near the tip of the papilla without evidence of hydronephrosis should be labeled as Randall plaques in the absence of renal colic symptoms. On either imaging modality, if the calcification can be seen surrounded by urine in the collecting system, then this is likely a urinary stone that may warrant treatment. If more than 50% of the plaque is surrounded by parenchyma, this is a normal variant of renal anatomy and no intervention or further workup is required. While our definition for the how to differentiate a papillary Randall plaque from a urinary stone may not be universal, we propose that this should serve as a starting point to standardize these diagnoses with the goal of foregoing unnecessary procedures for patients, whether diagnostic or therapeutic.

Randall plaques don't necessarily lead to renal stones and we would readily admit that we do not yet understand what triggers such transformation. But to keep patients out of harm's way, we do know that these could and should be diagnosed separately from urinary stones.